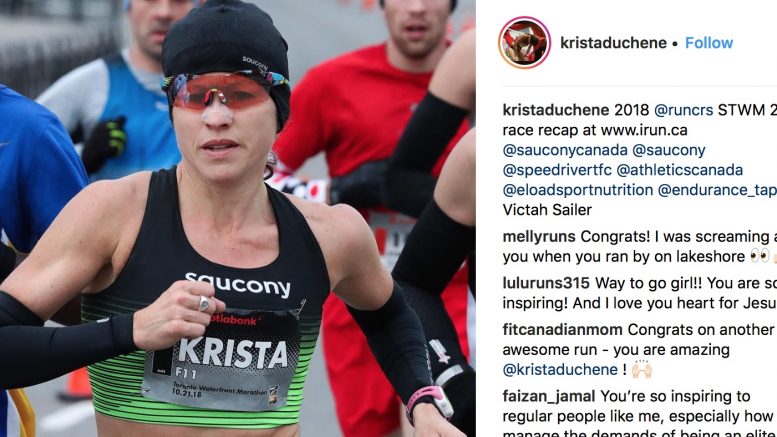 Krista DuChene, winner of WMA title at Toronto, was one of 14 female entrants in the world championships.

Close to 4,500 ran in Sunday’s Scotiabank Toronto Waterfront Marathon, with many (if not most) over 35. It was designated the World Masters Athletics Marathon Championships — the first time a 26-miler was held outside the WMA world outdoor track meet since 1975.

So how many folks competed for WMA medals? Would you believe 35?

Yup. Forty-three years after the first WAVA gold medals were awarded in the marathon — at Toronto worlds — runners couldn’t care less about a “world title” at Scotiabank. One reason: You had to pay an extra $110 to enter the WMA event, run concurrently with the bigger marathon.

At the 2016 Perth General Assembly, WMA voted to end the marathon at the track meet and start a separate championships concurrent with a major world marathon. That apparently was Sunday’s event.

The results book of 1975 Toronto worlds said: “With over 1,400 entrants and 5,000 individual starts, this was the largest track and field meet ever held in North America. At least one event, the Marathon, was the largest ever to have taken place in Canada.”

One has to wonder if the Scotiabank WMA marathon was the smallest ever to take place. Also: Is this just a bad start? Or does it mean the marathon is now a WMA afterthought?

4 Comments on "Was it a good idea for WMA to spin off marathon champs from world outdoor meet?"