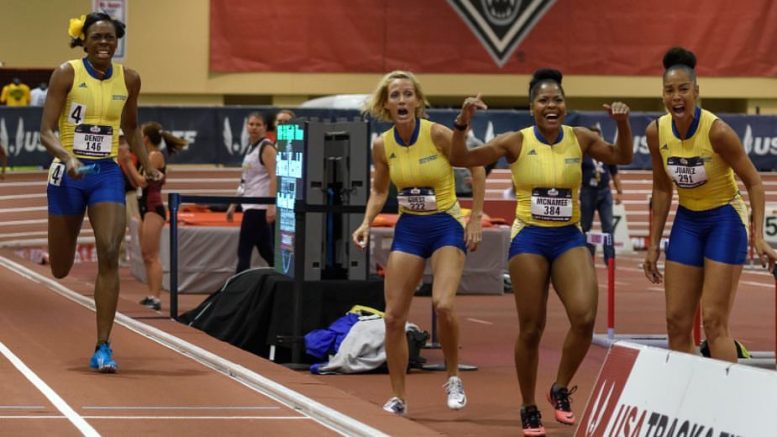 Elimination of club scoring wouldn't end relay celebrations, but Southwest Sprinters TC would no longer be in running for team title. Photo by Dave Albo

Last January, the WMA Competition Committee issued the world body’s “Rules of Competition 2018-2020.” Buried within, under Scoring, is Rule 151.1: “There shall be no overall Team Championships.” That appears to mean that WMA meets won’t score national teams for the purpose of identifying the top teams. OK fine. But since USATF likes to stay in step with World Masters Athletics, a rule proposal at the Columbus annual meeting this week aims to update USATF rules to end club scoring at masters nationals. (See team results from Maryland indoor nationals and Spokane outdoor nationals.)

“Item 71 – Submitted by Graeme Shirley, Rules Committee Masters” asks that USATF amend Rule 331.2 as follows: “There shall be no overall Team Championships.” Rationale is given as compliance with WMA Rule 151.1.

My prediction: This change won’t happen. Just because it’s on the docket doesn’t meant it’s destined for OK.

Among other things, many delegates are members of clubs — and invested in the tradition to scoring nationals and awarding club titles. Also: An argument can be made that clubs recruit for the sake of national titles, and club growth could be stymied if titles are off the table.

I wrote masters national Chair Rex Harvey, and he replied:

Graeme [Shirley] did an exhaustive comparison of WMA and USATF Masters rules. There are several items like this that WMA doesn’t do so he wrote up us not doing it. He did it to be complete. We can override and do what the majority wants to do. We can have our own rules that differ from WMA practice, but in my opinion, we must not do anything that disadvantages our athletes. Something like allowing an implement that differs from the WMA spec. Additional implements like the Super Weight are fine, different Weights at different ages than WMA is not OK.

In fact, the word “masters” appears 104 times in the USATF rules proposals, so give them a gander to see if your ox is gored (or groomed).

In the meantime, what’s your view?