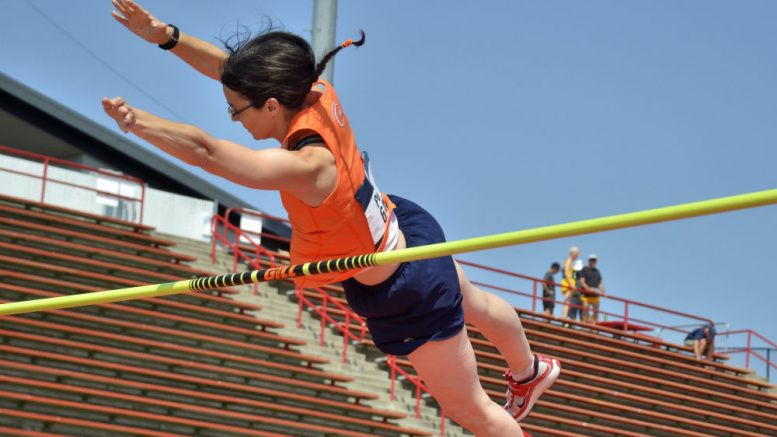 Becca flies over bar at Spokane nationals as she makes her W35 debut after years promoting event.

Becca Gillespy Peter, the PoleVaultPower.com legend who made her masters vault debut at Spokane over the summer, has posted her valued endorsement of Willie Banks, our masters track friend, for IAAF Council. One commenter on Becca’s post said: “Fearless prediction – Banks in a landslide.” Delegates will make their pick this coming Saturday at the USATF annual meeting in Columbus, Ohio, where the favorite daughter (and local resident) is Stephanie Hightower, the incumbent U.S. rep to the IAAF Council. If Willie wins, it will be a ratification of my bit role in his career. In 2009, at the Reno annual meeting, I suggested that the USATF Masters T&F Committee nominate Willie to the USATF Board of Directors. He was, and he won a seat on the board, lasting six years.

I recently shot Willie and Stephanie quickie Q&As, and my story in Times of San Diego also quotes the folks who nominated them.

“How can IAAF better grow the sport? I have a plan that I would like to discuss in Columbus,” Willie said, referring to the annual meeting. “I hope you don’t mind if I don’t divulge it now.”

I’m not going to Columbus, but I look forward to hearing details. Let me know what you hear.