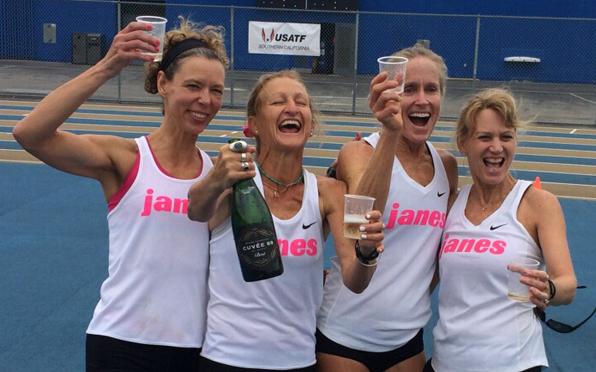 Janes Elite Racing entered two 4×800 relay units at Saturday’s USATF Southern California Association Masters Championships at West Los Angeles College. (See results here.) The younger Janes (ages 33 to 42) clocked a fine 10:24.31. But two seconds back were four Janes ages 52, 52, 53, 53. They ran a sensational 10:26.85 to smash the W40 American club record of 10:45.23 by Athena TC in 2012. But the American and world record remains 10:24.21 at 2014 Winston-Salem nationals by Beth Shisler, Sarah Allers, Claudette Groenendaal and Lorraine Jasper. The Janes were led off by Tania Fischer (2:34) followed by Kathy Cushing-Murray (2:43), Kirsten O’Hara-Leetch (2:36) and Judith Stobbe (2:29). And lest there be any concern about record eligibility, it’s OK to have only two teams racing. USATF rules say: “At least three competitors, and in relays at least two teams, shall be bona fide and have participated in the event in which the record purportedly was established.” Perhaps the same team can reunite at nationals for shot at the WR.