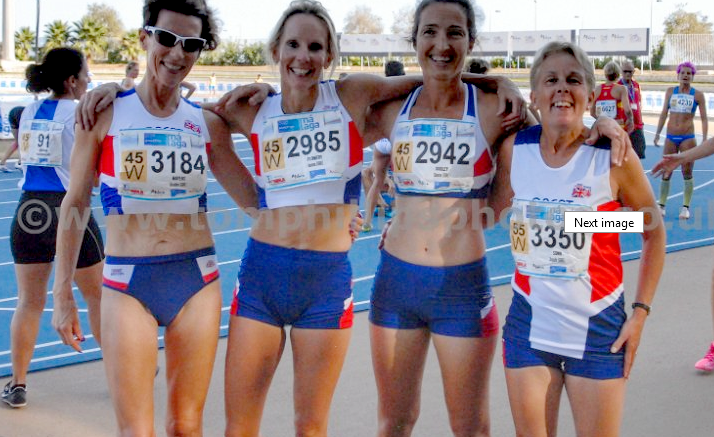 In fact, she ran only once — dropping down to anchor the W45 relay, which took sixth behind Team USA’s fifth. The W55 British relay team took gold in the 4×4, but results don’t reflect the actual lineup. Photo by Tom Phillips

So how does her name appear in the W55 results, which shows her team winning gold? I wrote WMA officials (crickets) and British meet manager Maurice Doogan, who responded: “Angela being included in both results was brought to my attention by guys at home checking the results, on Monday 17th, whilst on the way back to London. I raised this issue with WMA and the LOC on Tuesday 18th and they are looking into it.”

This isn’t a mere curiosity. At 2015 Lyon worlds, a British W35 4×100 team was DQ’d after it was discovered they ran someone who was not on their roster as one of the four legs or as an alternate. The result? The U.S. team moved up a place and took the bronze from the Brits.

Now it’s déjà vu all over again. But this time, if the Brits are DQ’d the Americans move up from silver to gold. That U.S. W55 team was Shemayne Williams, Lorraine Jasper, Adriene Allen and Kathleen Shook.

I’m not sure how Maurice was involved at Malaga, but he once was suspended for shenanigans involving “illegal substitution” in the Lyon relay.

In any case, the Malaga relay results aren’t set in stone. The Yanks may yet grab gold in that 4×4. Stay tuned.

Here’s how I learned of Relaygate — from a Welsh newsletter account.

Angela Sonn – or should that be Bryant, married her partner Mike just before the trip, so hundreds of friend joined them on their honeymoon in Malaga!

In the 4×100 relay Angela joined the top three ranked GB (W55) 100m athletes Mel Garland, Kirsten King and Eni Font Freide to form a really strong team. The baton changes could have been sharper, but with no relay training this was to be expected. Despite this, they achieved 56.52s for 3rd place and a Bronze Medal.

Angela had also been selected (through the proper BMAF selection process) to run a leg in the GB (W55) 4×400 relay team.

When she arrived in the pre-race call room Angela was unceremoniously bumped out of the team and replaced by another athlete. As the relay teams all had to be fully agreed and declared to the organisers the day before the race (we had seen a copy of the team sheet) we knew that Angela was in the GB (W55) squad. However, on the day, it appears that something underhand took place, which must have involved part of GB Team Management and probably the self appointed captain of the W55 squad.

Angela was shuffled down into the W45 relay team (she is almost 58) and unsurprisingly they failed to medal. Meanwhile, the team in which she should have raced, the W55 ladies, came home with Gold. To rub salt into the wounds Angela’s name remains on the official results sheet, so it looks as though she won a Gold Medal. Her name also appears on the GB team within the W45 results.